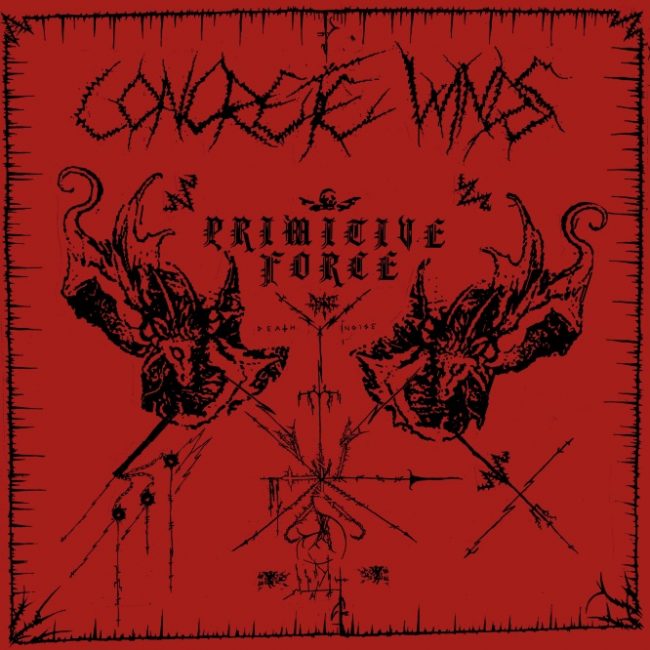 After their highly acclaimed debut, Poisoned Void, and the outstanding mini-album Current Mouth,
many shows and two european tours, Finland´s VORUM ceased to exist.
But the dead can not die, for they are still hungry…
Up from the ashes a new phoenix arises: CONCRETE WINDS is about to release one of
recordings ever erupting from the far north by the name Primitive Force, through SEPULCHRAL VOICE.

The album opens up a maelstrom to the deepest pits of Death Metal.
This is beyond a journey; this is a fucking rush, starting as ripping as it ends, without a single warning.
Wildest fury & blackest wrath are the godfathers of Primitive Force.
A total of 25 minutes of pure blasphemy, sadism, and dystopia crash through the listener and leave either
earbleeding disgust and horror or divine fulfillment and broken furniture.
Primitive Force is an epitome of violence and a prime example of how far extreme metal
can be driven without losing the musical aspects.
In today´s scene, the ignorance towards most musical principles and dramaturgic elements
became a virtue/policy while exploring the most extreme.
But all too often, it drifts into droning noise and chokes the power & magick of rhythm and riffing.
It is different with CONCRETE WINDS.
In spite of the utmost shredding, thundering, and screaming, this album still has musical ambitions.
Primitive Force is evil speed metal riffing and death metal heaviness combined
with a black metal performance & attitude.
Where ‚Current Mouth‘ ended, ‚Primitive Force‘ starts and drives every audial aspect to the maximum.
On the other hand, this release keeps every layout aspect to a minimum.
CONCRETE WINDS reduce everything to a lo-fi, cut & paste undergroundish presentation.
They set a statement and raise the middle finger to a distraction shot from what is relevant.
Simply, CONCRETE WINDS´ Primitive Force is the pure magick of a death metal sound and gospel.

Mersus of the Underworld Studios (DEGIAL/DESTROYER 666/GOSPEL OF THE HORNS) draws responsibility for
the intense recording: a professional production intentionally held rough, unfiltered and everything but polished.