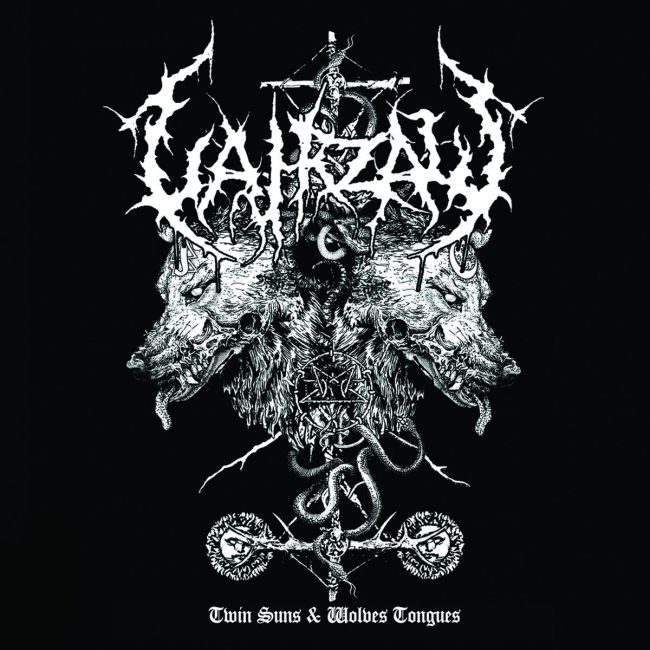 BLOOD HARVEST RECORDS is proud to present VAHRZAW’s Twin Suns & Wolves’ Tongues on CD format. Originally self-released in 2014 on CD-R in extremely limited quantites, Twin Suns & Wolves’ Tongues was VAHRZAW’s second album following a long, tangled history. VAHRZAW was formed in 1992 in a southeast Australian industrial cesspit by high school friends. The earliest incarnation of the band was named Necromancy. Primitive death metal was the order of the day until 1993, when the style shifted to black metal. Name-changes ensued, from Midgard to Deathcult, until 1994, when a stable three-piece lineup formed and the true VAHRZAW emerged. Three cassette demos of raw, filthy black metal were released, one of which was on the same label as Australian scene-legends Abramelin and Anatomy. The band ceased to be in 1998, but seven years later, the project was re-formed with the same core members. A mix of black and death metal naturally flowed in rehearsals, and it has resulted in two albums, two EPs, and two splits to the present day, all fully self-funded, from merch to production. A third album is in the early stages of rehearsal and will be released in 2017 for the 25th anniversary, and promises even more of what VAHRZAW is about: riffs, aggression, speed, and total BLACK DEATH! And now, BLOOD HARVEST makes this ever-gnarly, gleaming-obsidian gem widely available at last: prepare to be minced and mangled by Twin Suns & Wolves’ Tongues!