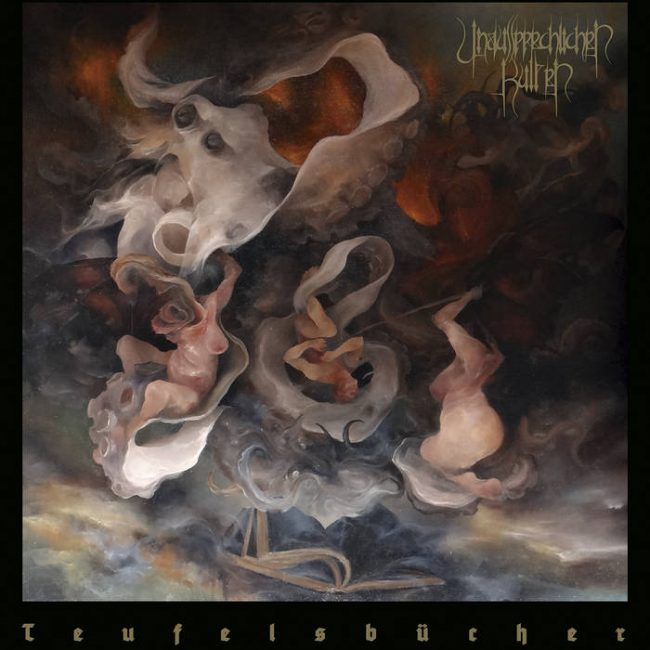 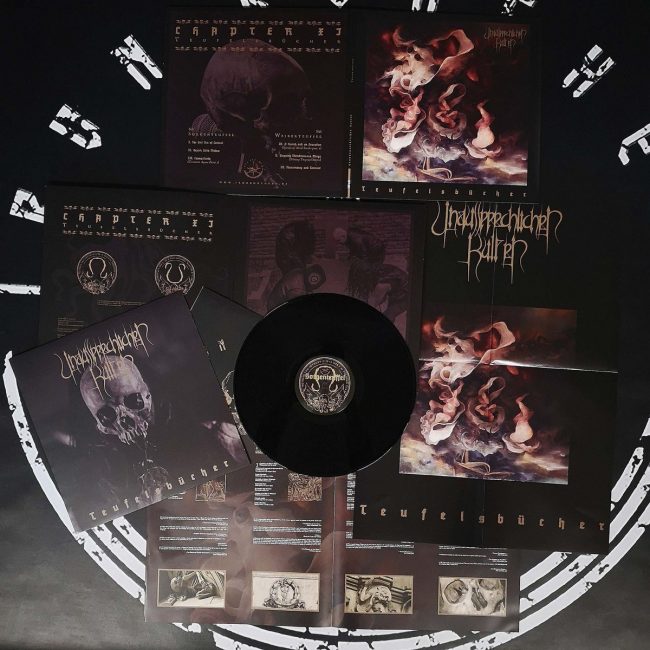 Although one can easily say that Teufelsbücher encompasses the signature UNAUSSPRECHLICHEN KULTEN aesthetic – songwriting that slithers through the slime with a preternatural grace, execution that’s barbaric and crusted in mud and blood, production that plumbs the foulest ends of the sonic spectrum – uniquely, this fathomless fifth full-length is arguably the band’s densest and most dissonant work to date. Unleashing morbid fascination regarding superstition and witchcraft, UNAUSSPRECHLICHEN KULTEN once again suffuse their increasingly angular ruminations with a thoroughly researched thematic grounding.

Teufelsbücher – literally, “The books of the Devil,” written in German – had their pinnacle since the end of Luther’s existence in 1545, until 1604. During that consolidation period of the amendment, with 39 original copies, they are in great deal the precursors from the great house of witches. The Devil acquires strength step by step, which will reach its zenith in the 16th and 17th centuries when Europe granted an enormous attention to the Devil. The Teufelsbücher sentenced sharply that every mortal committing a sin would inevitably fall under the powers of the lord of Hell. Written with the purpose of denouncing vices and sins back then, theologists and inquisitors wanted to contribute on this particular fight against evil writing treaties where nature, knowledge, cunning, and the power of Satan were questioned, and where means were established to fight spells, omens, charms, vane healers, the notorious art, etc. Through hundreds of pages, prodigious, fantastic, wonderful, and scary stories were included, as well. However, along with revealing their own perversion finally instead of warning men, they ended up causing fascination and unleashing morbid fascination regarding superstition and witchcraft.

With this quite-literally medieval foundation firmly in place, UNAUSSPRECHLICHEN KULTEN proceed to plow through 42 minutes of exceptionally epic and challenging territory. Totaling six stout labyrinths of song, Teufelsbücher twists and turns in diabolically obscene / obscenely diabolical ways, retaining immediacy and urgency despite those daunting song lengths. No less feral and frightening than before, UNAUSSPRECHLICHEN KULTEN bend the listener’s mind (and body) to their unholy will, slipstreaming with a devilishly nuanced grace paradoxically at odds with their blunt-force trauma. Of course, hallucinogenic tension reaches a fever pitch here on Teufelsbücher, as the powerless listener pleads for sweet release…only to find ever-more-treacherous territory, each barb more gnarled than the last.

UNAUSSPRECHLICHEN KULTEN have built a nigh-unchallenged canon that takes all the urgency ‘n’ ugliness of classic death metal and upends it into the realm of high art. When, this late into their career, they could easily coast into crowd-pleasing catchiness, these revered Chileans take the path less travelled and speak ever stranger tongues: verily, Teufelsbücher.