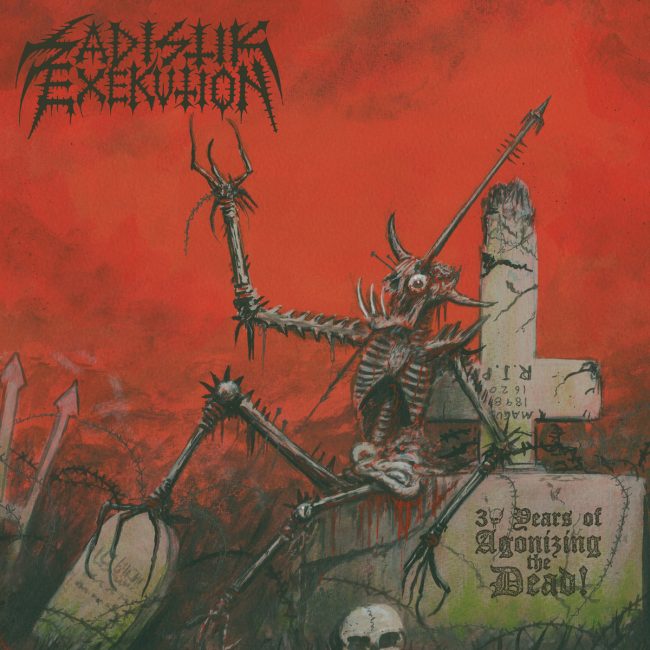 One of the most vile and tormented sounds to ever exist is the “Mental Metal Musik” belonging to none other than the now infamous Sadistik Exekution of Sydney, Australia. Although these lunatiks gained much of their notoriety from their full-length albums, the full scope of Sad-exe’s unforgiving violence cannot be entirely appreciated without proper exposure to the atrocities committed on their demos and EPs. Nuclear War Now! has conspired with none other than Dave Slave himself to dig up several of these wretched slabs of audial torment and once again offer them posthumously to any who dare expose themselves to such vileness. This LP release of “30 Years of Agonizing the Dead” (AKA “Sadistik Exekution’s Shittest Hits”) compiles two of these demos – “Agonizing the Dead” (1992) and “Suspiral” (1991) – as well as two EP singles – “Demon with Wings” (1996) and “Sadistik Elektrocution” (1997) – for your listening displeasure. Also included is a 20-page booklet featuring incriminating band photos from the era, the unmistakably demented artwork of Rok, and a recent, never-before-seen interview with Mental Metalkutioner, Dave Slave. In case that isn’t enough for you, NWN! has also released a die-hard (AKA “dick-hard”) LP version that includes the rare “Rehearsal Demo 1987” as a bonus 7” EP for the most masokistic among us. Thanks for listening… FUKK YOU!