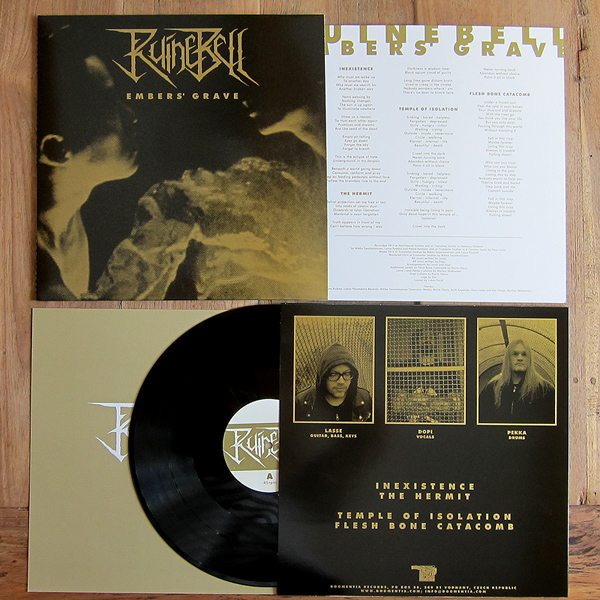 Back in 2011, longtime friends Lasse Pyykkö from HOODED MENACE and Dopi from, then, MACHETAZO realized they shared a mutual love for what was labelled ‘stenchcore’ in the mid-80’s, that mix of heavy and dark metal with crust and apocalyptic themes. Both having already collected many side-projects proving their eclectic taste (death-metal, doom, D-beat etc.), they wasted no time coming up with a new entity, RUINEBELL. And four years after their debut EP (‘Demise in Disgrace’) and with now Pekka Koskelo (also from HOODED MENACE) behind the drum kit allowing Dopi to focus on his spiteful vocal delivery, they’re at it again. And what a scorcher ‘Ember’s Grave’ is…

AMEBIX and AXEGRINDER will once again be proud and more than ever, you can also see VOIVOD dystopian shadow in the back. But while the martial drums and somewhat cold wave vibe is still vivid here, clocking at a grand total 21 minutes, those four new songs showcase a thrashier and more headbanging side while at a same time leaning towards something more sinister. Just check the subtle menacing keyboards layers of “The Hermit” or its surprisingly melodic nudges if you don’t believe us… You’ll probably never see RUINEBELL on stage nor will they ever tour but far from being just a one-off thing, ‘Ember’s Grave’ just proves that they keep on growing and aren’t planning to stop anytime soon. Watch out, Armageddon is just around the corner!