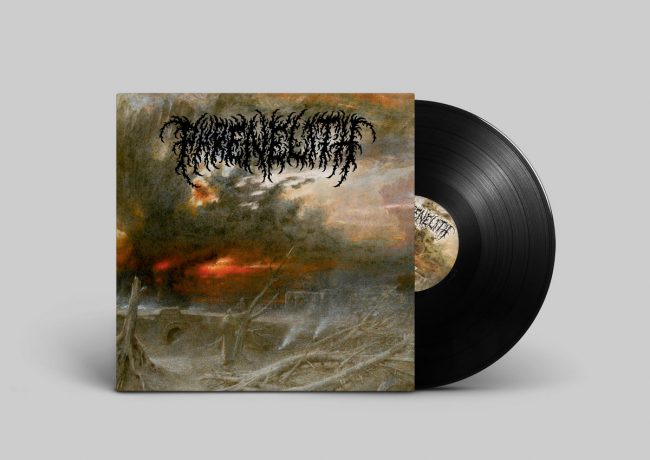 Issuing forth like a deadly miasma from the tombs of subterranean Copenhagen, Phrenelith unleash their debut full-length like the hounds of Hades themselves. Coming off a spate of well-received demos in addition to a split with Spectral Voice on Deutschland’s Iron Bonehead Records plus their Chimaerian Offspring Cassette EP on Extremely Rotten Records, the sound is foetid, guttural and gasping. Like a half-decomposed corpse disinterred from the marshlands, this slithering rotten filth is hideously attractive, repulsively inviting in its gruesome fascination. A fine sense of poise and grandeur leads to unusual progressions and neck-snapping rhythmic variations. Atonal apocalyptic melodies collide with off-kilter riff work, crossing the lines between traditional filthy death metal found on the lost tapes of the ’80s alongside splendid maniacal hooks a mile wide which will stand the test of time. This is the Desolate Endscape – abandon hope and embark on the descent.