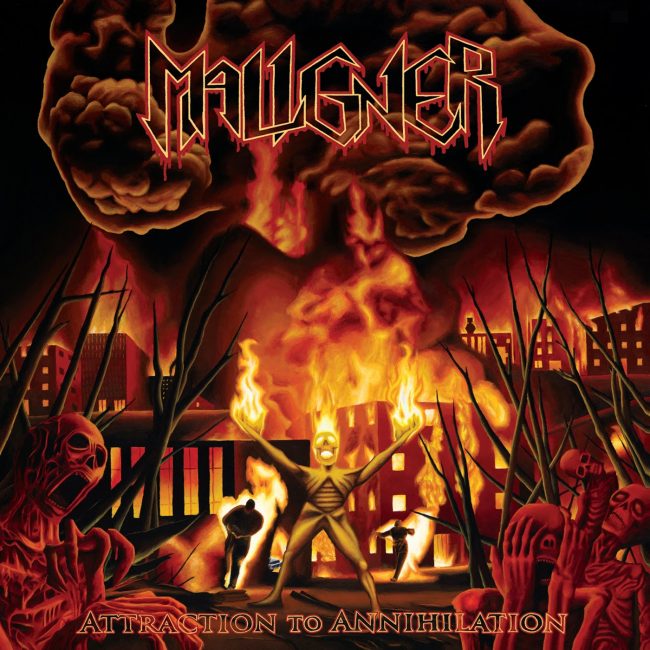 One of the most promising hordes BLOOD HARVEST have come across in some time, MALIGNER are a deathrashing power-trio hailing from the label’s hometown of Malmö, Sweden. To date, MALIGNER have a two-song digital promo released during the autumn of 2016 and then, a few months later, the five-song Demon EP, which BLOOD HARVEST release on cassette tape and digital formats. Bolstered by the attention afforded Demon, the trio truly come into their own on Attraction to Annihilation.

For a debut album, Attraction to Annihilation is as fully formed as they come. MALIGNER may be only entering their third year of existence, but the attention to craft and class across this eight-song firestorm is seriously the work of veterans – but, of course, ones not yet complacent with their ideas and especially execution. Right from the very first notes of opener “Oath-bound,” MALIGNER explode with a dazzling array of fleet-footed ‘n’ finessed death metal in a most late ’80s mold, back when actual songwriting mattered most and bands like Death, Sadus, and Dark Angel ruled the underground. Indeed, even nomenclature like “deathrash” didn’t really exist; it was simply all METAL, just darker and more deathly than what the aboveground was proffering. But, MALIGNER are no mere retro retread: their compositional prowess is in a league of its own, and their attention to the finer details of aggression bespeaks a maturity that thankfully isn’t neutering. In fact, the longer this 31-minute maelstrom rolls on, the more dizzying it becomes, possessing both body and spirit in a grand celebration of destruction and death.