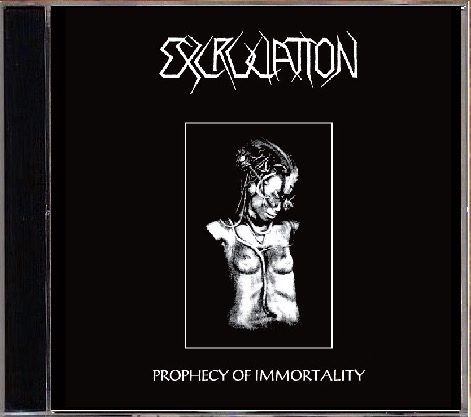 We are proud to announce our continued cooperation with legendary Swiss thrash metal act EXCRUCIATION, to present for the first time ever on CD, what was meant to be their debut album “Prophecy of Immortality”.

Originally only on cassette and was released as EXCRUCIATION’s first full-length album. Unfortunately, the record-company CHAINSAW MURDER RECORDS stopped producing. We Bite Record wanted to take over, but due to some problems with them (mostly financial issues) the band refused. A few record labels were interested, but well, being still teenagers wanting to conquer the world, none of the offers were good enough. It was later released only as MC. This deluxe 2CD set will feature the original audio mastered from the original DAT tape, as well as a newly remixed version of the album, mixed from the original analog tapes.

As a bonus we will be including for the first time on CD, the band’s complete Abyss of Time (1989) demo and the Act of Despair (1990) promo-tape.