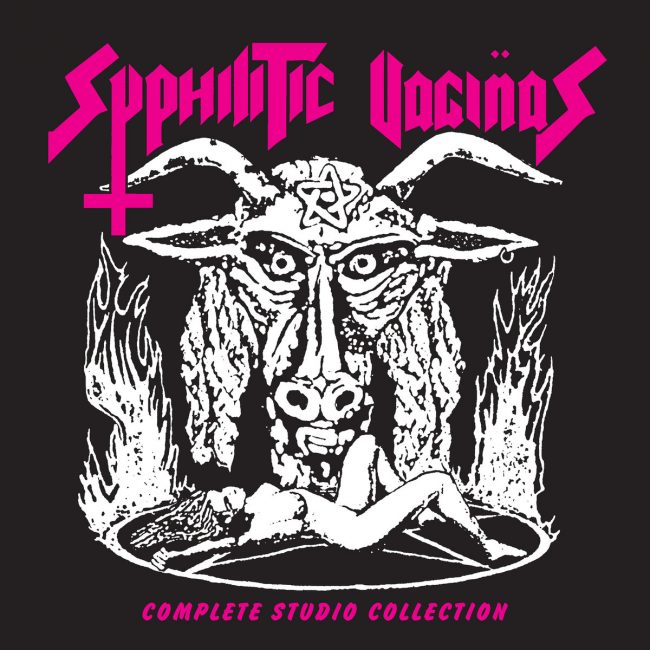 Although Syphilitic Vaginas has produced two full-length albums in its thirteen-year history, it is probably most recognized for the much more prolific number of EPs and split recordings that it has released during that time. Five of the earliest of these recordings, along with eight previously-unreleased tracks, were first compiled and released in 2008 on CD format by Rescued from Life Records in a collection entitled “Complete Studio Recordings.” This same compilation of destructive metal punk mayhem is now hereby released for the first time on vinyl DLP format, courtesy of Nuclear War Now! Productions. These thirty-five tracks perfectly distill into a single release Syphilitic Vagina’s dedication to a blend of sleazy and decadent sinvocations that rival those of the Japanese masters that the band admires most. Achieving a rare feat of being both raw in nature and incredibly precise in execution, the riffs are catchy and memorable without losing any of their undeniable virulence. Meanwhile, the demented vocals beckon one to commit unforgivably perverse pleasures of the flesh, as the bass and drums churn away as the maelstrom at the epicenter of the storm that harnesses its fury and drives it forward. Whereas the full-length album is typically seen as the standard by which a band’s worth is measured, “Complete Studio Recordings,” as a series of snapshots in a band’s early trajectory, reminds us of the potency that can be achieved in the more focused and abbreviated format of the EP and split, but only when the artist itself is up to the task. In the case of Syphilitic Vaginas, this prerequisite is satisfied in spades.