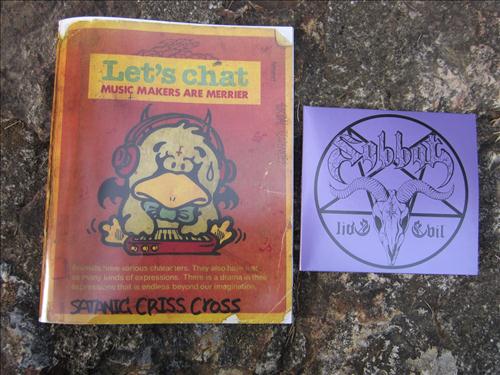 In conjunction with the release of the massive “Sabbatical Earlyearslaught” box set, NWN! is also making separately available the two volume “livEvil” DVD set.  Selected by Gezol from his massive library, this footage spans from 1986 to 1989 and was all recorded in Japan.  The “livEvil” DVDs feature all of the existing video footage of Sabbat from the 1980s.  Equally intriguing is the bonus material accompanying this DVD set.  Gezol is known for his meticulous note taking and record keeping.  In the early days of Sabbat, Gezol maintained a notebook in which he recorded lyrics and songwriting notation as well as commentary about all of Sabbat’s gigs and recording sessions from that era.  In preparation for “Sabbatical Earlyearslaught,” Gezol sent his notebook to NWN! for use in organizing the box set materials.  To see in one place such a wealth of first-hand historical information about this seminal band was so impressive that YK Insulter decided to print page-by-page replicas of the notebook.  While the DVDs are available as part of the Die Hard edition of the “Sabbatical Earlyearslaught” box set, albeit with slightly different packaging, this pro-printed 52-page reproduction booklet will only be included with the “livEvil” DVD set.