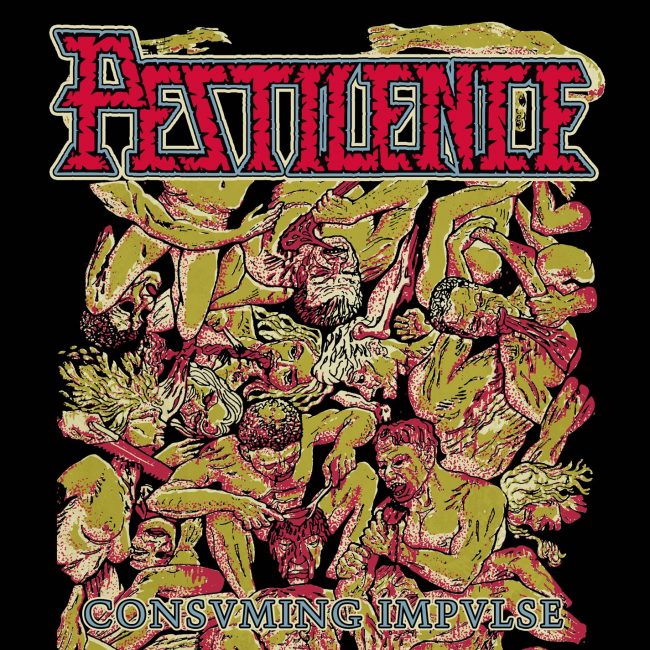 This is the regular black vinyl edition.
The double-LP for the 30th anniversary in 2019.
Album #1 is “Consuming Impulse”, Album #2 is “Live in Veghel 1989”
Originally planned artwork (finally) used, 180 gram vinyl, poster of the artwork.

The Best Old School Death Metal album from the Netherlands gets a well-deserved re-issue!

In an age when blast speed drums were still mostly used by grindcore acts (and some pioneers such as Morbid Angel) and now classic bands such as Cannibal Corpse, Suffocation, Deicide were still tiny demo acts, Dutch masters Pestilence released one of the best old school Dutch death metal classics ever to be unleashed upon mankind, the album that made a huge impact upon its release.

“Consuming Impulse” is one intense album. one could say this album is definitely up there with classic death metal albums such as Death’s “Leprosy”, Obituary’s “Slowly We Rot”, and Morbid Angel’s “Altars of Madness”.

With “Consuming Impulse”, Pestilence created their greatest, most complete album, successfully marrying the primitive brutality of their previous effort ‘Maleus Maleficarum’ with the technicality of their later releases.

The album had everything a 1989 death metal fan could ask for.

Speed, diversity, catchy tunes and riffs one could also enjoy humming or playing along. Apart from the sheer quality of this album, it also proved to be one of the most important and influential early death metal albums.