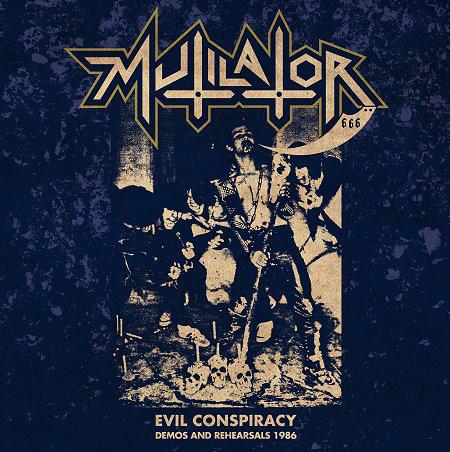 Straight from the hell of Belo Horizonte/Brazil and the merciless savagery of that city?s early Metal scene, MUTILATOR stands as one of the rawest and most uncompromised offerings of true Brazilian Death-Thrashing brutality. This record collects all the existing recordings featuring Silvio SDN on vocals (except the “Warfare Noise 1” comp. trax that have been already reissued by other labels): so you get the “Blood Storm / Grave Desecration” demo 1986, an insanely fast and raw rehearsal 1986 that the band had recorded as bonus on the cassette that they exclusively sent to Jon Metalion for being reviewed on Slayer Mag and a bonus CD with 3 different live sets from that period (“Festival Da Morte” / “Carioca Club” / “Slaughter Fest”) for a total of 32 bloody tracks mastered from the best sounding sources in existence (forget the bootlegs that have circulated in the last years). If you’re a maniac of the Cogumelo classic era of Death/Thrash bestiality (SARCOFAGO, HOLOCAUSTO, early SEPULTURA, VULCANO just to mention the most popular) you can’t go wrong with this: insanely fast drumming, fantastic riffing and that unique vocal delivery that makes this an instant classic of rawness at its purest form. Quoting the bass player Ricardo: ..”those were the golden years of Brazilian Metal, and the recordings included on this LP show an epic period of our scene, my wish is that the headbangers from all over the world will enjoy it.. After all everything becomes history, and this is a history of love for a kind of Metal that will never die.” Housed in a thick gatefold sleeve with a fanzine styled A4 bookled packed with rare photos, flyers and liner notes!