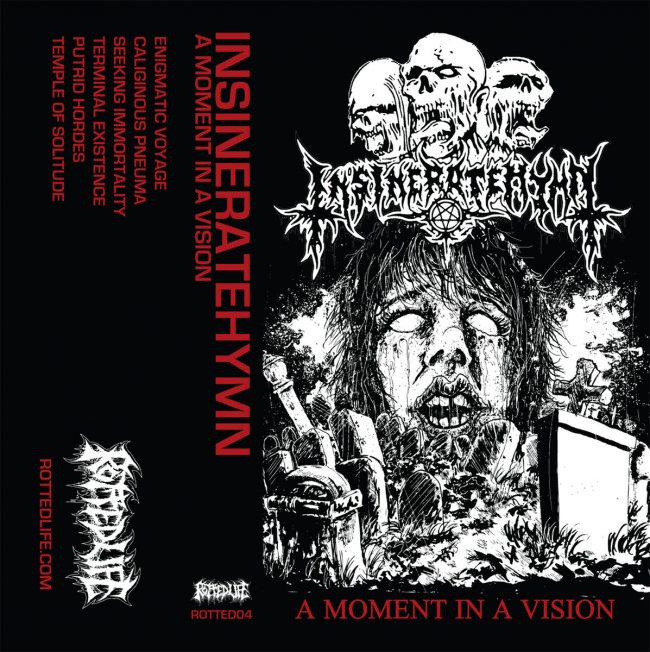 INSINERATEHYMN – A Moment In a Vision TAPE

Joining the hordes of death metal coming out of southern California, Insineratehymn is a 5 piece outfit from Los Angeles, originally formed in 2008 by former vocalist Mauricio Lopez, then later reforming in 2016 under Abraham Garcia (drums, ex-Transcendence). Over that time the band has built up a reputation playing shows opening for Chicago death metal veterans, Master in 2016 and sharing the stage with popular local acts within the West Coast death metal scene. Their fresh take on the old school sound is delivered with deadly efficiency, the 7 tracks on “A Moment In a Vision” rife with malicious riffs and seething with a ravenous dark energy and ghoulish lust. Released on CD by Russia’s Narcoleptica Productions in July, 2018, now available as a US edition cassette via Rotted Life
For fans of early Unleashed, Repugnant, and Skeletal Remains.

“This is an incredibly solid release, one that is bloody, heavy and skull crushing through and through, a true embodiment of death metal. This is a malicious release, one seething with malignancy and ghoulish murderous intent. You simply cannot go wrong with A Moment In A Vision” Cadaver Garden