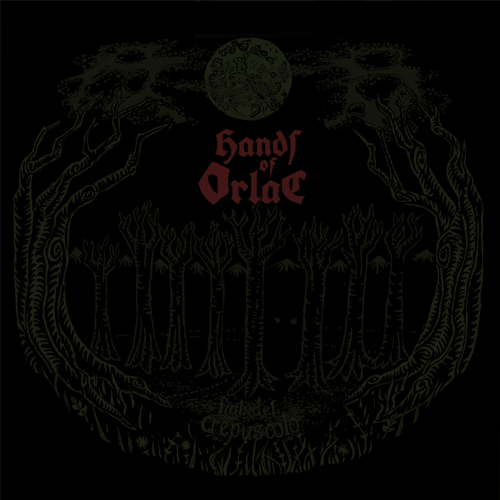 Three years after the release of their self titled debut album in 2011 and the relocation of the original Italian members to Sweden, Hands Of Orlac have finally returned with their second album entitled “Figli Del Crepuscolo” (Italian for “Children Of The Nightfall”). And there could hardly be a more suitable title for this album which was again recorded at Studio Misantropen with Philip Svennefelt behind the console.
From the first seconds of the album it is clear that the band has come a long way since their debut. While remaining absolutely faithful to the style created on that first album and being immediately recognizable as the same band, this album seems to have more of everything: Bigger production, more elaborate songwriting and an immense flair for dark atmosphere.
The band has maintained their lyrical universe mainly inspired by the gothic Italian horror cinema (for example “A Coin In The Heart” which is based on Mario Bava’s classic “Operazione Paura” (aka “Kill, Baby, Kill!”), and the powerful production perfectly enhances that gothic feel with its big and warm sound which is both clear, heavy, and somehow, strange and captivating…Just like the songs themselves.
While this album might reveal more of their progressive rock roots (showcased by the at times intricate arrangements as well as halos of analog delay), it is at the same time an album which has (Doom) Metal written all over it with its catchy riffs and intense guitar solos, never forgetting an atmosphere of doom and sorrow. Add to this the use of flute and solemn female vocals, and this combination makes for an album which will always make you grasp the songs quite easily yet is never predictable, and will for a long time make the listener discover new things at repeated listening. Hence this album cements Hands Of Orlac as exponents of the famous yet quite unidentifiable Italian Dark Sound, a term which much less describes a particular style than it does a certain intense atmosphere of mystery – and this album has that mysterious atmosphere aplenty! This album is truly music from beyond…
Mastered by Berno Paulsson at Berno Studio.
The LP comes in a heavy gatefold sleeve including a 6” sticker.