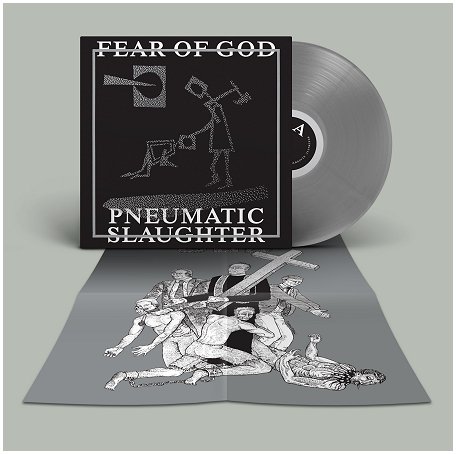 Limited edition on silver vinyl (250 copies). 4th and last installement in the high-quality FEAR OF GOD vinyl series on F.O.A.D. Records.. for those who aren’t familiar to what was released before: s/t 7″ as picture disc gatefold Ep, “As statues fell” (extended version) as gatefold LP (black, white and picture disc), “Under the chainsaw” (“Konserven” demo + tons of bonus tracks) as gatefold LP (black, blue and picture disc). This LP collects the band’s legendary “Pneumatic slaughter” EP with 6 bonus tracks from the same show (Live 13/2/1988 @ AJZ Reithalle, Bern, Switzerland) + the complete ultra-brutal Burlandingen gig (9/1/1988), for a total of 48 tracks, also featuring covers of GAI, FATAL VISION, SIEGE and L?RM. Each session transfered from 1st generation mastertapes provided by Erich Keller and specially mastered for vinyl at Toxic Basement Studio, a guarantee of sonic excellence on this kind of works. It captures the rawness and mindblowing aggression of F.O.G. at the top of their devastating extremity, with that unique sound no band has been ever able to outdo in terms of brutality and annihilation. You don’t need many words to explain how this sounds like. Every single frame of FEAR OF GOD is the most extreme and brutal delivery of what has been ever conceived in the clash of sounds between Noisecore and Hardcore. As Erich states: “Hardcore, grindcore, death metal, noise, fuckshitupism ? whatever. We didn’t agree on much, but on the following we were unanimous ? that Fear Of God should be the most extreme band in the world, or as we would say, the most ?brutal.? Every member of the band was under pressure to deliver his contribution with the utmost intensity. The drums had to go as fast as possible, the guitars should grind out riffs as well as produce a wall of noise, the bass and backing vocals should lay the heavily distorted grounds for the overall basic structure and I did everything I could to make my voice sound non-human.” Housed in a deluxe gatefold sleeve with transparent UV-spot and silver foil print + A2 poster with unreleased art by Morbid Mark!