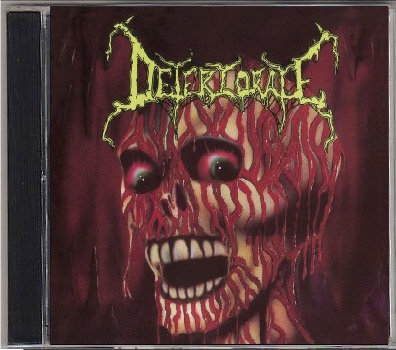 THIS IS A PRE-ORDER ITEM. THIS ITEM AND ALL ITEMS ORDERED WITH IT WILL SHIP ON/BEFORE SEPT 29, 2017.

DARK SYMPHONIES / THE CRYPT is proud to announce our cooperation with legendary American Death metal act DETERIORATE to reissue their amazing 1993 debut album “Rotting in Hell.” Grisly, raw and extremely heavy death metal played with uncompromising brutality, the way it was meant to be played.

Having been long out of print for years, we are proud to offer this amazing classic death release once again! Included as a bonus are the band’s 1992 self titled demo, 1993 “Agonized Display” Demo and their 1995 “Gather the Nebbish” demo.

The CD is designed after the original 1993 JL America release, featuring original cover artwork, taking elements from the original layout with attention to detail, even down to the logo and typeface for a touch of nostalgia. Also included are unpublished classic band photos, flyers and brand new liner notes from original founding member Frank Ierovante.