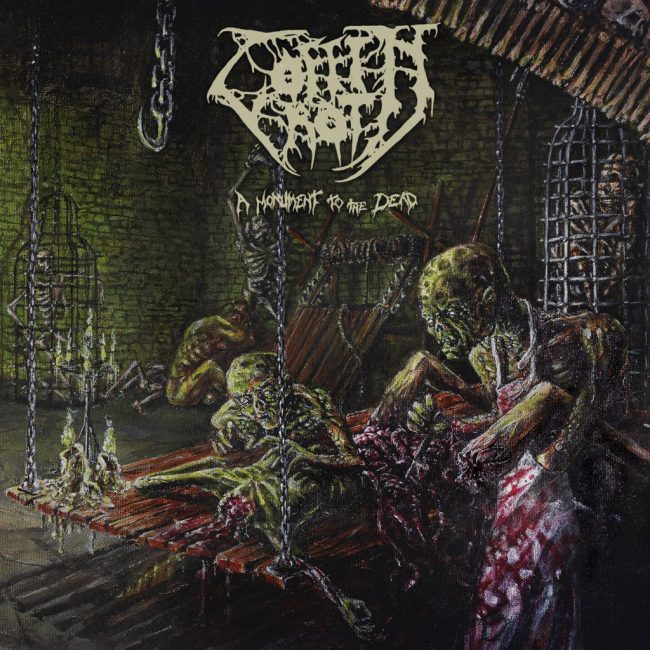 COFFIN ROT – A Monument To The Dead LP

Formed in 2017, COFFIN ROT quickly set to work on their first demo, following it a year later with another one as well as a split with comrades Molder. Wasting no time, now comes the power-trio’s full-length debut, A Monument to the Dead, displaying their swift mastery of the Metal of Death. Aptly titled, A Monument to the Dead is a timeless and trend-free synthesis of various eternal strains of death metal: Grave’s proud ‘n’ powerful surge, Cianide’s sewer-drenched doom-death, the blackened corridors of early Immolation, and a whole host of other equally stout influences. However, it’s the manner in which COFFIN ROT are able to rearrange these parameters into something horrific and, above all, immediately memorable: while by no means sticking to predictable verse/chorus rock-music structures, A Monument to the Dead retains a strangely hummable catchiness whilst remaining resolutely and utterly DARK and DEATHLY. Adding to the album’s potency is a clear-yet-crushing production that’s the epitome of powerful – and one which is richly analog, ably highlighting COFFIN ROT’s very human (and very literal) execution.

Completed by dank ‘n’ disgusting artwork courtesy of Skadvaldur, COFFIN ROT deliver A Monument to the Dead – are you among those doomed souls?